Article in Catholic Times about our Grotto by Mickey Pannell

December 2001 marked the 40th anniversary of the construction and dedication of the stone grotto at Immaculate Conception Church. The anniversary will continue with Marain devotions and conclude with novena prayers, Nov.29-Dec.7.

Msgr. Anthony Missimi, pastor at Immaculate Conception, began this celebration, Sunday Oct. 7 the feast of Our Lady of the Rosary, after 11:30 Mass. He lead prayers of thanks and devotion and a decade of the rosary. The IC Women’s Club hosted an ice cream social afterward. 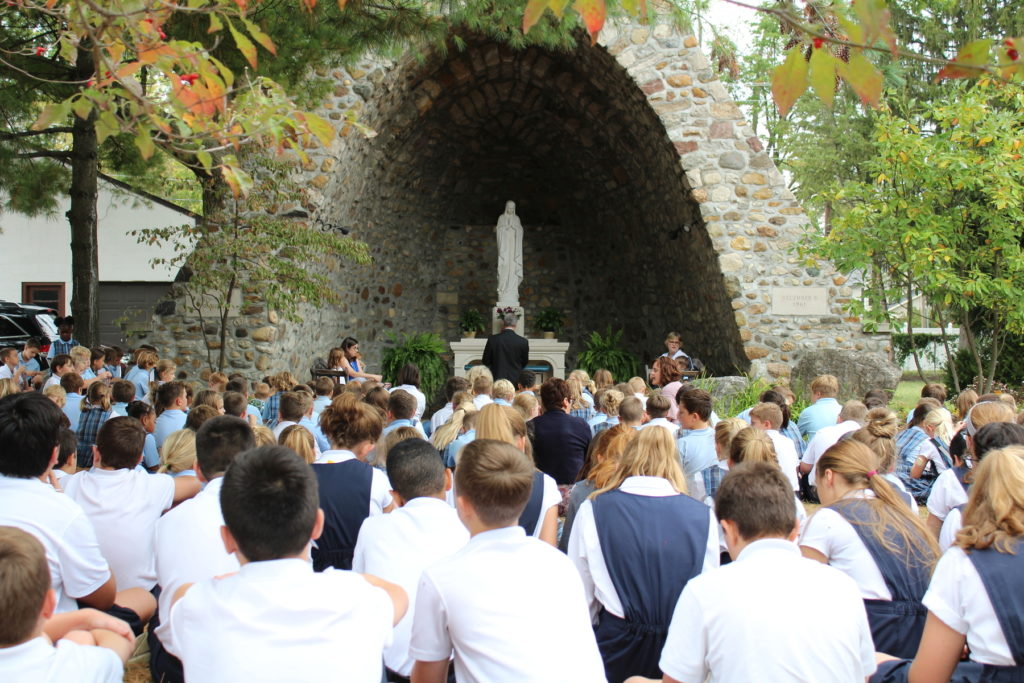 The Grotto was built in 1961 in recognition and for increased devotion to, the Blessed Mother.
It stands on the near the church on East North Broadway. The statue of Mary gazes out on the busy street, a setting not unusual for a shrine or grotto for the Blessed Virgin. North Broadway is one the major east-west streets in the north end, crossing the Olentangy River and connecting the I71 and 315 freeways.
This particular grotto is one of the few in Columbus and is unique because the stones for its construction were collected by parishioners. The stones –granite, marble, iron ore, obsidian, rose quartz, linestone, and coal — came from every state in the union, several countries, including Israel, and Columbus.
There are many parish legends about the stones: one tells of parishioner Mary Trenor, who placed an unusual stone shaped like a prayer book or a bible there; another parishioner, Fred Shannon, former photographer for the Columbus Dispatch said he remember a stone from his ancestral country of Lebanon.
According to Alice Morill, her late husband, Paul, who was an Ohio State University architect, drew up the plans for the grotto. But she said the original idea came from James J. Ryan, a member of the Holy Name Society Men’s Club. Father Richard Crosser, the pastor at the time oversaw the 1961 project.
Other grottoes around the world, such as Lourdes and Notre Dame, place Mary in a niche on the side wall; but at Immaculate Conception, Mary is the main attraction, standing in the center, holding her rosary.
As a result, the grotto at Columbus Immaculate Conception is a truly fitting tribute to Jesus and Mary and the people who devoted so many hours to this beautiful space of the holy grotto of Mary.
Mickey Pannell and her husband Duane are parishioners at Columbus Immaculate Conception Church.

The more I contemplate God, the more God looks on me. The more I pray to Him, the more He thinks of me too. St. Bernadette