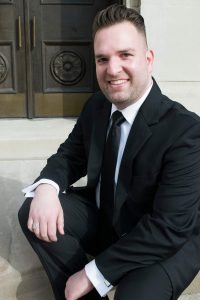 We are pleased to welcome Adam Fehrenbach as our new Music Director at Immaculate Conception. He received his Bachelor of Arts in Music from The University of Akron with a concentration in both piano and voice, a Diploma of Pastoral Liturgy and Music, with a concentration in Conducting from Saint Joseph College in Rensselaer, Ind., and received his Master of Sacred Music and Organ from Duquesne University in Pittsburgh, Penn.

During his time in the Canton/Akron area, Adam was the Director of the Greater Canton Men’s Chorus, and the Chorus Master for the Canton Comic Opera. In addition to working with many adult and children’s choruses around the area, he has directed for the Unknown Theatre Company, co-directed for the Young Peoples Performing Arts, and has been a music director for the children’s theatre at Western Reserve Playhouse. Adam recently got married in April 2021 and is looking forward to not only serving this new community in Clintonville, but making a home for him and his wife, Jessica.