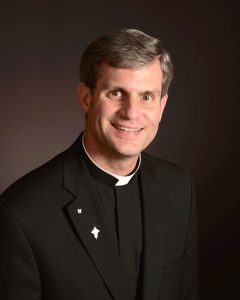 Reverend Matthew Hoover is from Lancaster, Ohio and graduated from Fisher Catholic High School in 1987.  He earned a Bachelor’s Degree in Philosophy from the Pontifical College Josephinum in Columbus, Ohio;  a Bachelor’s Degree in Theology from the Gregorian University, Rome, Italy; and a Licentiate Degree in Spiritual Theology from the Teresianum University, in Rome. He was ordained to the priesthood on June 24, 1995 by Bishop James A. Griffin.

Fr. Hoover served as associate pastor at two parishes – Church of the Resurrection in New Albany and St. Peter Church in Columbus; he also served as administrator of St. Francis de Sales Church in Newcomerstown. From 1999- to 2004, he served as the Director of Vocations for the Columbus Diocese while in residence at St. Matthew Church in Gahanna.

Fr. Hoover then served as pastor at several parishes, including St. Peters in Chains Church in Wheelersburg, St. Monica Church in New Boston, and St. Joseph Church in Dover.  He has served as pastor of Immaculate Conception Parish in Columbus since 2013.